The end of Lent, but the challenge goes on...

It's Easter Sunday, and the end of Lent. Eagle-eyed readers will notice that I haven't posted for a while, and unfortunately this is because I haven't got on very well with my decrapifying. In fact I have another three bags of clothes and a box of stuff just from the master bedroom, but I never managed to get them to the charity shop, so I didn't quite feel I could write about them.

Although I was happy to have found the 40 Bags In 40 Days blog, I was slightly distracted by all the post by people who had the time to spend day after day sorting, binning, donating, and so on. I fell into the trap of comparing myself with others in different situations, and feeling guilty about not matching up to their standards. If I had kept in mind that it wasn't a competition, I would probably have got more done!

In any case, I intend to carry on at my own pace, and I will reduce my clutter (slowly but surely). I'll be concentrating on the useless things I've been carrying around with me from place to place for years, particularly those things that come with their own emotional baggage, and trying to keep from replacing the things I've got rid of with more clutter. Perhaps by Advent I'll be able to report more success!

I'm definitely coming up against the problem of finding time both to declutter and write about it!

In the last few days I have been collecting together make-up that I don't use (usually because it was a free sample and the wrong colour), plus free sample creams, spare emergency hair brushes, and other miscellaneous items cluttering up my bedroom. I have packed them up to send to a charity called Give and Make-Up (www.giveandmakeup.com), which distributes donated make-up, toiletries and other essentials to women who flee domestic violence and end up in refuges with nothing. Hopefully the glittery pink nail varnish and strange perfumed creams will make someone else's day just a little better. 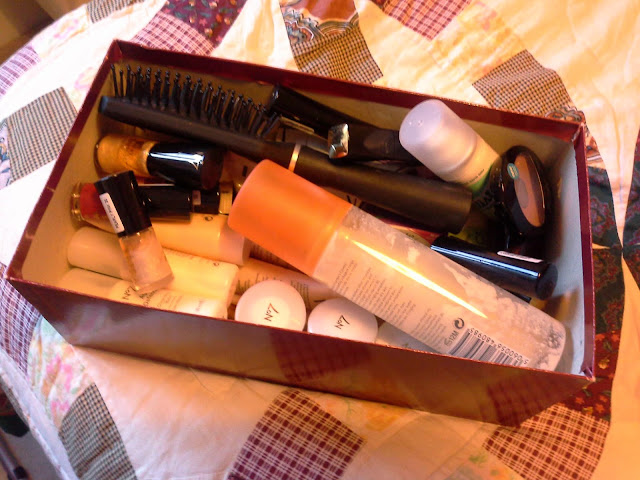 Full of renewed vigour after discovering the 40 Bags In 40 Days community, I decided to tackle the airing cupboard. This previously contained sheets and towels we 1) use on a regular basis, 2) use irregularly but reliably, for example when parents come to stay, 3) haven't used for a while but might conceivably do so, for example if lots of people came to stay, or 4) haven't used in years and can't imagine when we might do so again.
The killer category here is number 3 of course, but with a little help I managed to get the keepers down to 1, 2, the newest-looking set of single bedding, and a few assorted hand towels. Everything else went in The Bag, and for the first time in a long while I now have more sheets and towels that I'm using than not.

I donated this bag to a charity called Aspire Oxford, a charity which creates employment for disadvantaged people in Oxford through services such as textile recycling. Green Templeton College is taking part in a recycling challenge at the moment, so I have added my bag to the pile.

In '40 Bags' terms I think that's my fourth bag (guessing because I didn't actually bag the magazines), so I'm quite far behind. More motivation needed, I think... 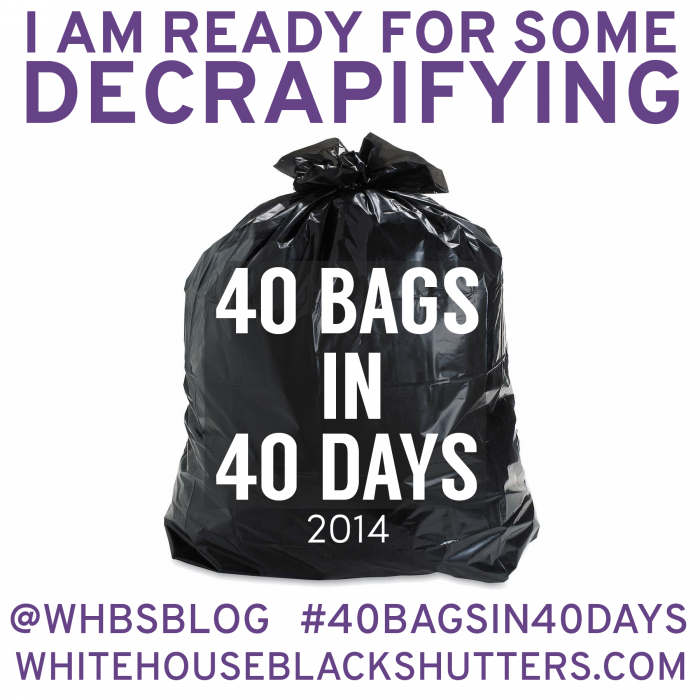 If you can think of it, it already exists on the internet.

Today I discovered 40 Bags in 40 Days, a blog which supports people trying to do exactly what I'm trying to do: declutter for Lent. The writer Ann Marie provides helpful progress charts, lists of areas to concentrate on, and even a downloadable sticker chart if you like that sort of thing.

I admit I have been slacking a little in the last few days, partly because I found disposing of the paperwork (some of which represented major negative life events) more traumatic than I realized, but I'm hoping to get back on track with a little organization of effort. Look out, stuff - I'M COMING FOR YOU!

Updated: I almost forgot to mention that I found the link via the 'Weekend Reads' post on Joshua Becker's Becoming Minimalist blog, which you will have noticed by now is the set text for this challenge. Thanks Joshua!
Posted by Unknown at 16:30 No comments:

Well, as you might have guessed, I didn't go straight on to clothes. I took a look in the wardrobe and decided I should focus on slightly more limited challenges first (there's no way the wardrobe is a potential quick win to boost morale!). So I thought a good followup to magazines and catalogues would be paperwork. You know what I mean - all the important paper that you really have to keep. Not junk at all, right?

Wrong. Because if you're anything like me, not only do you have the current important piece of paper (statement,  policy, receipt,  whatever),  but you also have last year's, and the year before, and probably several years before that as well. To compound matters, I have five places in three different rooms where I keep said paperwork. Not without any system, I should add - roughly correlated with when I started to keep that particular type of paperwork and how regularly I access it now. But certainly not straightforward enough to make putting new papers away a quick and easy task, which only adds to the piles of stuff sitting around.

Here are some of the things I pulled out and got rid of:
● several years of expired home and car insurance policy documents
● letters reminding me of long-gone medical appointments
● notices about long-expired savings rates (5.1%, imagine!)
● a paper TV licence from five years ago
● the sale paperwork from my Stalybridge house (sold in 2008)
● insurance paperwork from my car crash eight years ago (even the legal firm said they would get rid of the file after seven)
● notices about pensions I have transferred out of
● minutes from a church committee I used to be on (not my current church)

This list goes on, and there are more files I probably should throw away,  but I'm not quite ready to let go of some things yet. Later on in this process I'll look back and have another go at getting rid. Already it feels cathartic to have got this far. It'll be interesting to see what happens when I move on from 'throw away' to 'give away', which is what I plan to do next.

So I had to decide where to start my decluttering work today. At one time I would have been tempted to start with the worst, most junk-laden part of the house. Currently that's the spare room, which as you can see is mostly a place to stack boxes and stuff that doesn't really have a proper home. However, one really useful recommendation from Joshua Becker's book Simplify was to start with the easiest places and build up to the difficult ones; that way the quick wins help to build momentum. Having given this some thought, I decided that a whole room might be a bit too much to start with, so I decided to go with the more straightforward option of catalogues and magazines.

Catalogues wouldn't be so bad if they were just the ones I had asked for (two up to last year,  and I recently cancelled one of those). It's the others, the ones where you buy one thing from the website and this automatically signs you up for booklets every month or two and endless 'special offers'. As well as recycling all the mailouts I stack up to flick through later (because, you know, there might just be something I want in there), I also now have a list of companies to write to to be removed from their mailing lists (paper at least). A neat side effect of this is that it should make it easier to keep to the second part of becoming (a bit) minimalist, to buy less stuff in the first place.

As for magazines,  it turned out that I had a stack so elderly that the average doctor's surgery would have been embarrassed to have them in the waiting room. The reason I use to justify keeping these is always that there is an interesting article in there that I might want to read again. Looking at a copy of New Scientist from 2006, I can now state with some confidence that the chances of me doing that are pretty low... I have compromised with myself by tearing out a few articles that caught my eye as I was checking through (I know, I know - a problem for another day), but the vast bulk has now gone into the recycling box. I only have two active subscriptions at the moment - one has gone on the list to switch to a digital-only version, but the other doesn't have that option - I could pay more and have access to the e-version as well as the paper copy, which seems to defeat the point. I'll just have to resolve to be stricter with myself about getting rid when I have finished (any suggestions of how to train myself gratefully received).

Buoyed by today's success, I'm considering moving straight to clothes - but I'll sleep on it and see if I can still stomach it tomorrow... 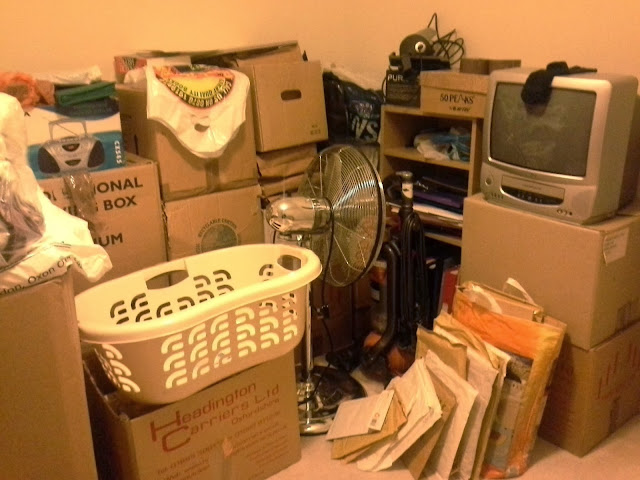 Junk Free In 40 Days Or Your Money Back?

I have a lot of stuff.

This is a feeling which has been growing for some time (particularly since our last house move, which for various but mostly stuff-related reasons was quite traumatic), but I have been inspired to do something about it by a book that I stumbled on, Simplify by Joshua Becker, and his blog Becoming Minimalist. Becker is a committed minimalist, but he doesn't live in a white-walled loft apartment with no furniture and a single flower in a vase for decoration. He is a regular father-of-two in a family home, who, after a chance conversation with a neighbour a few years ago, decided with his wife simply to own less stuff; the process which followed involved both reducing the things they possessed, as well as actively deciding not to replace these things with other unnecessary stuff.

I have decided to use this year's Lent to give at least the first part of this a go (and I'm assured that the second part follows more easily once you get into it). On the basis that Lent is about charity as much as it is about fasting and abstinence, I will be attempting to become minimalist by donating to charity or just giving away the stuff I don't need which is in good condition. Throwing away (recycling as much as possible, of course) will be reserved for junk, although I suspect there will be a large amount of this.

Sadly, Becker doesn't offer the guarantee in the title of this post, which I'm fairly sure he would think rather misses the point. I can't promise to become a full-on minimalist by 20 April (Easter Sunday), but on the other hand this is a long-enough period that, if I can keep up the clearing-out and the keeping-clear, I should have formed some habits by the end which will help me keep on in the right direction. And of course there is this blog, which, should I have time to write it after all those epic clearout sessions (ahem), will provide some accountability.

I hope that some of my friends will read along to see how I get on over the next few weeks.